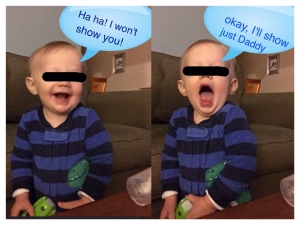 Punkie is getting his teeth, finally.  He didn’t get his first tooth until about two weeks ago — he was 13 months old and toothless!  Now, he’s working on his third tooth in two weeks.  Friends, these are crazy times in the Punkie household.

I’m not entirely sure that I’m handling his teething pain properly, although I am doing what the doctor recommended.  When Punkie is in the throes of teething pain, he’ll grab the cold teether from my hands and throw it at the wall.  Other times he might play with it and quickly leave it behind.  I end up giving him some Motrin or Tylenol.  On a rare occasion, I might give him a little of each, depending on his level of distress and the timing of doses.

A friend recommended Hyland teething tablets, but I was reading online about how they aren’t entirely safe, so I don’t want use them.  I read about teething necklaces, but, after getting to know Punkie the way that I do, I’m not entirely sure putting a noose . . . er necklace . . . of beads around his neck is a good idea.  I also read about numbing stuff that you rub onto the gums, but there are some doomy sounding warnings around that.

What’s getting me going, though, is that he won’t show me his teeth willingly.  I’ve been reduced to planning a surprise attack and wrestling with a baby.  I have to wait until he’s trapped in his highchair and REALLY FAST put my forearm across his forehead, hold his arms down, and get my finger into his mouth before he realizes what I’m doing.  Otherwise, Punkie will suddenly display ninja-like reflexes and ward me off.  The sneak attack is key.

But he shows my husband willingly.  That doesn’t seem entirely fair to me.  I’m just sayin.