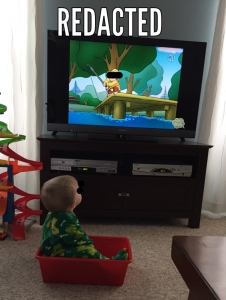 I was thinking about how my kid is a little bit like the old 60s-era alien spaceship in that movie, “Independence Day.”  If you recall, a rag-tag team of patriotic heros found refuge in Area 51 in Nevada, where they meet a squirrely scientist (played by the actor who played Data in “Star Trek: The Next Generation”) who is all excited about the aliens.  To paraphrase, the squirrely scientist is excited because he’s been stuck a million feet below the surface of the Earth studying this old spaceship for 30 years and it isn’t until just now that the power has turned on and he’s discovering all kinds of cool, new things about it.  Of course, Bill Pullman didn’t appreciate the excitement, having just watched some stuff blow up (Bill Pullman, what a grouch).

But that’s how I feel – I’m the squirrely guy and Punkie is that old spaceship.  And I’ve been stuck in a dark hole in the ground toiling away without really knowing too much about what I’m working on (i.e., the kid).

Suddenly, though, I’m learning all kinds of cool things about Punkie because he’s just now learning to communicate and do some things for himself.  For example, he really likes to pick out his own clothes each day.  And he beams with pride when he can say a new word – the newest is “apple”.  He loves saying “apple.”  And he loves his shoes and picture books about trucks.

I’ve also learned that he has good instincts.  I say this because he despises people wearing character costumes – HATES them – which makes sense because, if you think about it, the idea of someone dressing up in a character costume and walking around is weird.  If nobody ever explained that concept to you and suddenly you had some dude in a giant moose costume leaning in and waving at you, of course it would be weird . . . you might yell at the dude, rightfully.

Also, he enjoys Curious George and sitting in a red, plastic toy bin.  I respect the choices.